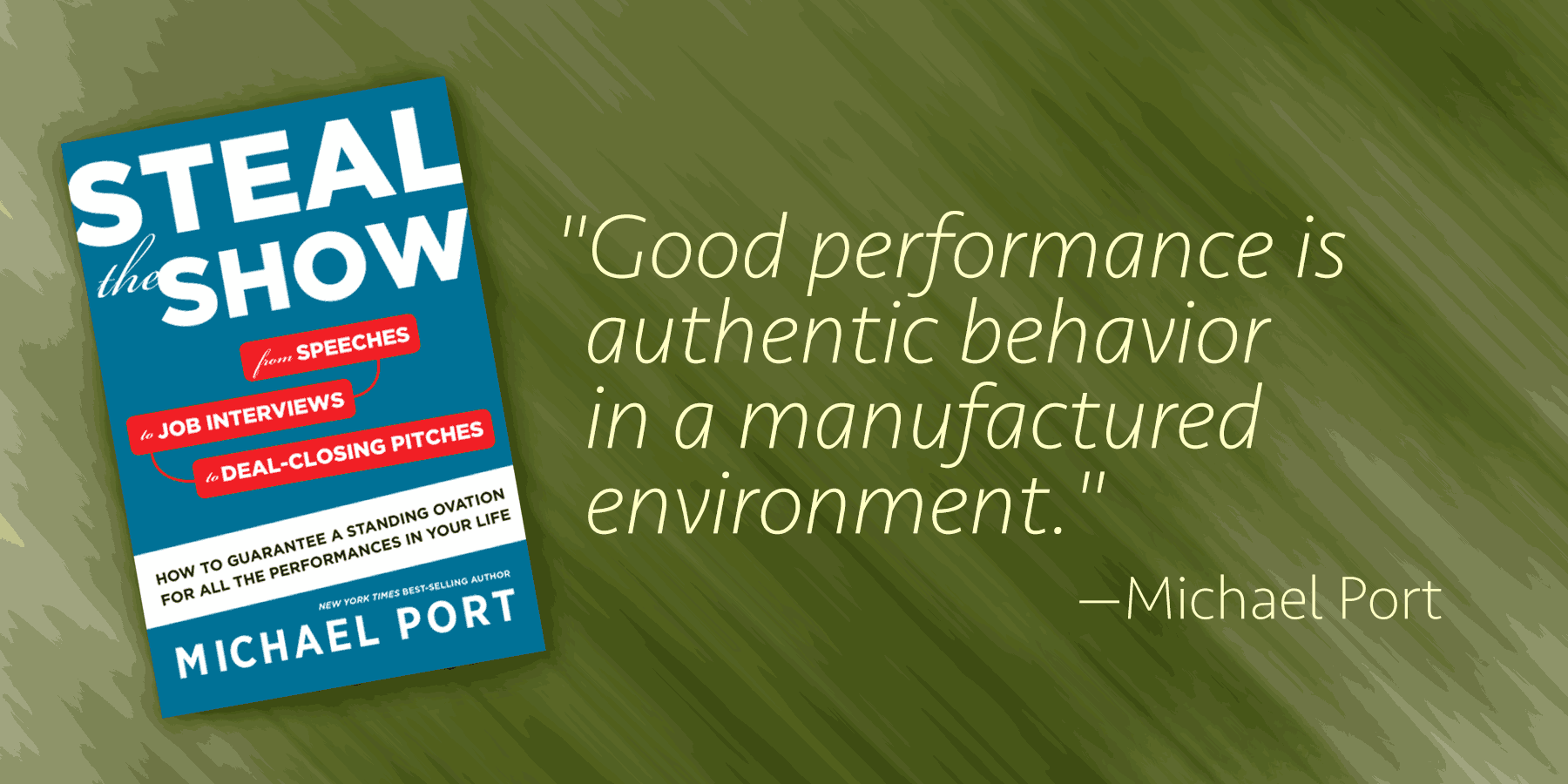 When I coach speakers, there are many moments that feel like breakthroughs. When they show a little vulnerability, and share something of themselves. Or when they internalize the text of a speech well enough to hit every point effortlessly.

But few moments give me the joy and satisfaction of seeing a speaker breach the barrier between reading a speech and delivering it. Between recitation and performance.

“You don’t have to pretend to be someone you’re not,” I’ll tell a client. “But you do need to intentionally project an amplified part of yourself. Let’s try that passage again.” They do, and the difference is enormous. When they see it played back, their jaws drop. And they never want to go back to reading a speech again.

I’ve said many a silent prayer for a book I could point people to that would help readers learn to deliver an authentic performance. And this month, I finally read one: Michael Port’s Steal the Show.

The cover promises “a standing ovation for all the performances in your life,” and Port doesn’t just mean speeches: he’s talking about everything from job interviews to asking someone out on a date. In every case, he says, whether you want to move a hall of people to action or just arrange a romantic dinner for two at a cozy restaurant, performance skills can help you carry the day.

If “performance” carries overtones of insincerity, Port quickly dispels them, stressing that it isn’t about feigned emotion or forced enthusiasm. Instead, it’s taking the skills we’ve instinctively developed around conversation to convey emotion and connect with people, and adapting them to the demands of presentation to an audience.

And “performance” isn’t a metaphor in Steal the Show. Port comes from an acting background (if you watched Sex and the City or Third Watch, you may well have seen him), and much of the book explains how you can apply the tools of acting to public speaking. With techniques such as the improv principle of saying “Yes, and…” and an actor’s meticulous, relentless preparation and rehearsal, he shows you how you can elevate your delivery far above the vast majority of speakers.

The book addresses speechwriting, and offers an interesting take on the kinds of structures a presentation can use. But the heart of Steal the Show lies in performance, and that’s where I’d argue the need out there is greatest. This is one of those books I know I’ll be returning to often, and I recommend it highly.

← Speechwriting mistakes: four ways I screwed up (so you don't have to) A speechwriting lesson from House of Cards →