The Pigeon of Dorian Gray, and why you should throw it off the fire escape 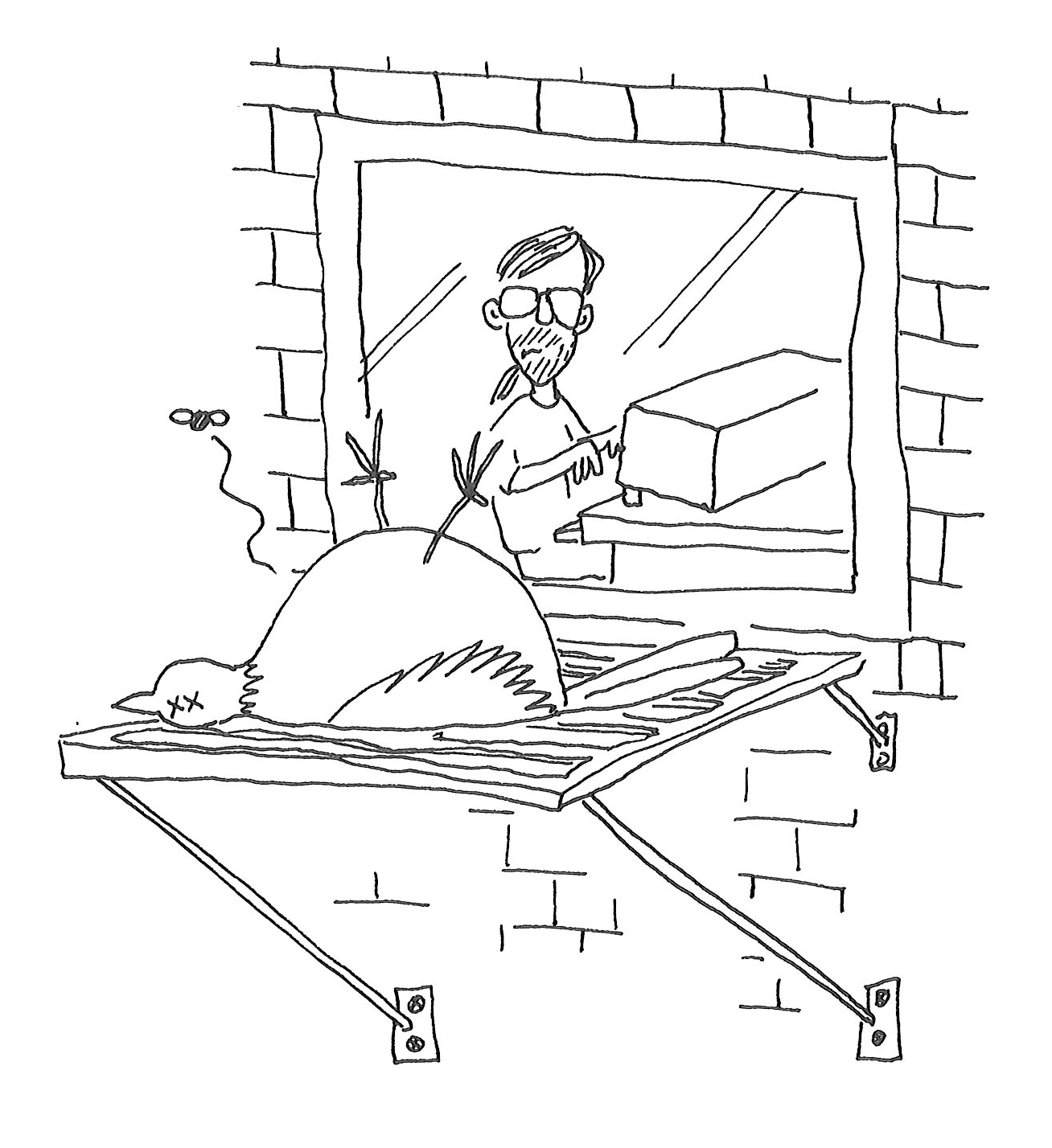 Early in my speechwriting career, I was writing for a political candidate. It began with a few weeks of straight-up euphoria. Great news coverage. Enthusiastic volunteers. Support and donations rolling in.

(And I got to use state-of-the-art technology: a Compaq luggable computer, with a tiny amber-coloured screen. Imagine the form factor of a classic Star Trek tricorder, except built in the Soviet Union. At the time, it seemed like a miracle… a bulky, leaden miracle.)

Then we hit the doldrums.

Our momentum stalled, and we found ourselves in a dogfight. All that glowing news coverage began to dim: our momentum was stalling, people said—and impressionable lad that I was, I took that to heart, and so did many of the other young volunteers in the office.

More fundamentally, the candidate was still fairly new to elected politics… and to public speaking. In her* first few debates and speaking appearances, it was clear she was still finding her voice as a speaker. And I was still struggling to write material that would work for her. The audience response to her speeches was muted at best, and the media reviews were often snide. I took that very personally, and felt thoroughly frustrated.

It didn’t help that our committee room had all the air circulation of a coffin. And as the temperature and humidity climbed in tandem, there was one source of frustration that outstripped all others: the window.

The office had one opening window, which was latched shut. A sticky note warned that the window was not to be opened except in dire emergency (a fire escape landing was immediately outside), because that would set off a burglar alarm. And if that happened, well… actually… ah… The consequences weren’t spelled out, but in a way, that only made them all the more dire. None of us wanted to be the one responsible for a headline like “Campaign idiots cause evacuation of building, SWAT team response”.

And it wasn’t as though opening it would turn the office into a springtime paradise; the window looked onto one of the city’s darker, less well-appointed alleys. You could practically see the air hanging there: a stagnant miasma of methane, garbage fumes and discarded poutine, laced with a soupçon of urine.

Still, we’d look longingly at it as the temperature climbed and the building’s feeble air conditioning did the bare minimum required to hold up the landlord’s side of the tenancy deal.

During the spring, the fire escape outside was the domain of a fairly randy flock of pigeons, doing the Three Cs of Pigeoning: Cooing, Crapping, and Copulating.

But sometime in June, a single pigeon waddled into the centre of the fire escape platform, slumped onto its side, and carried out a fourth C: Croaking.

A call was made to the building manager company, who promised swift action. “Swift action,” it turned out, meant allowing the pigeon to slowly decompose until a strong enough rainstorm swept away its remains. 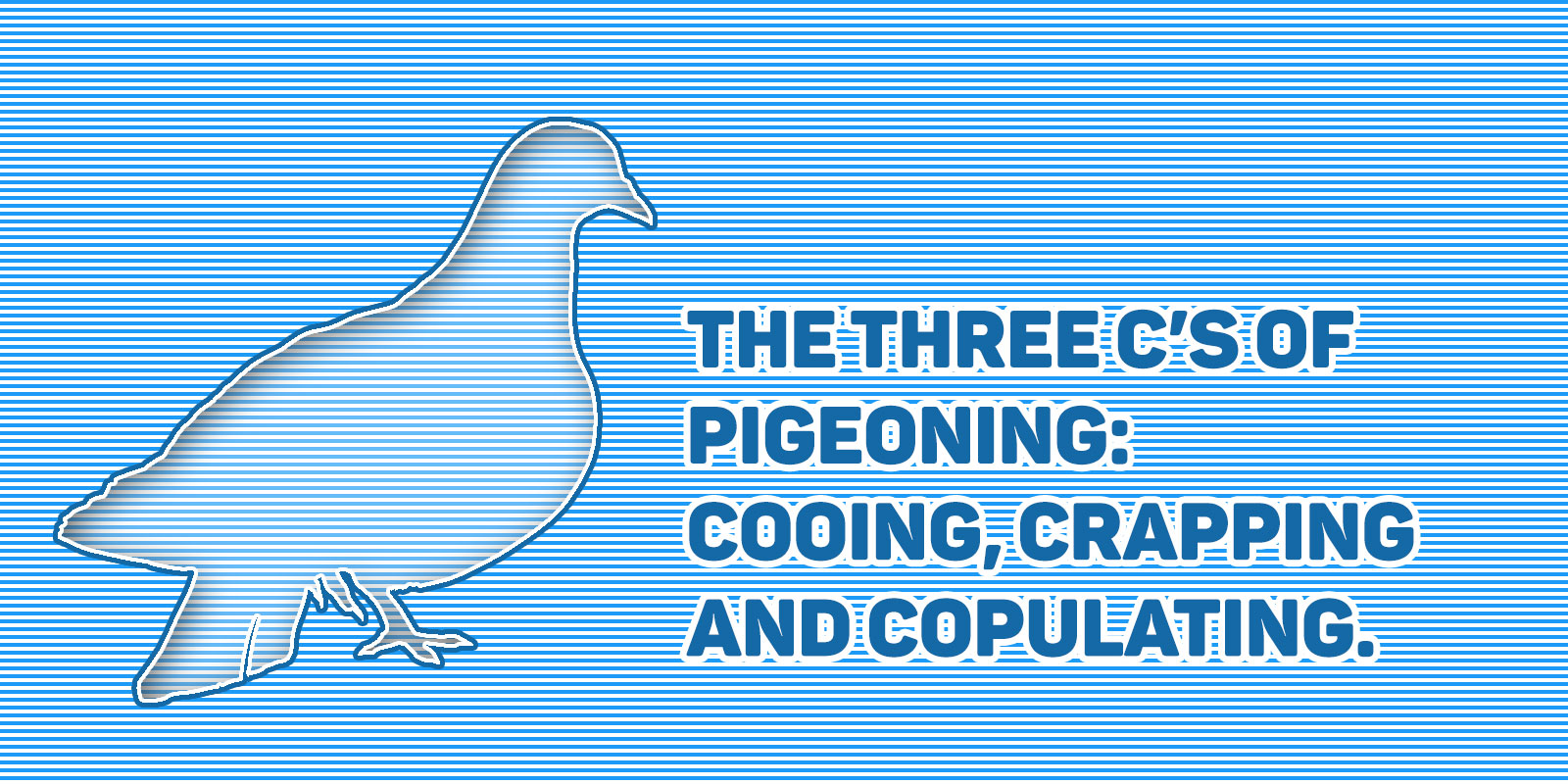 We had a variety of stop-gap solutions, like taping up campaign signs to block the window. Somehow they always came down. And even while a sign was up, you were never really unaware of the decomposing horror behind it.

You couldn’t hold a meeting without sensing the pigeon’s presence, just beyond the glass. You couldn’t call a research source or fundraising prospect without feeling its dead, cloudy gaze on the back of your neck.

“We should get rid of that thing,” someone would say. There would be murmurs of agreement. We’d go back to phoning contacts, collating lists, writing news releases.

I couldn’t help myself: I’d look up constantly from the Compaq to see just how far things had deteriorated outside. Were any feathers coming off? Could I make out bones yet?

As it turned out, those were the same questions pundits were asking of our campaign. We seemed to be in some kind of weird reverse Pigeon of Dorian Grey situation. As our momentum gradually deflated, so did the pigeon.

I was working some late hours as we prepared for a major speech. I was mentally blocked: the stuff I was writing was glutinous and hackneyed, and one particular night, in the wee hours, it was starting to turn pretty bleak, too.

I was alone in the office. Just me, the humidity, the flickering fluorescent lights, and the disintegrating corpse outside the window.

Thunder rumbled in the distance. The Compaq made its little choking noises as it encoded sub-par writing to the flimsy data disk in its upper drive. 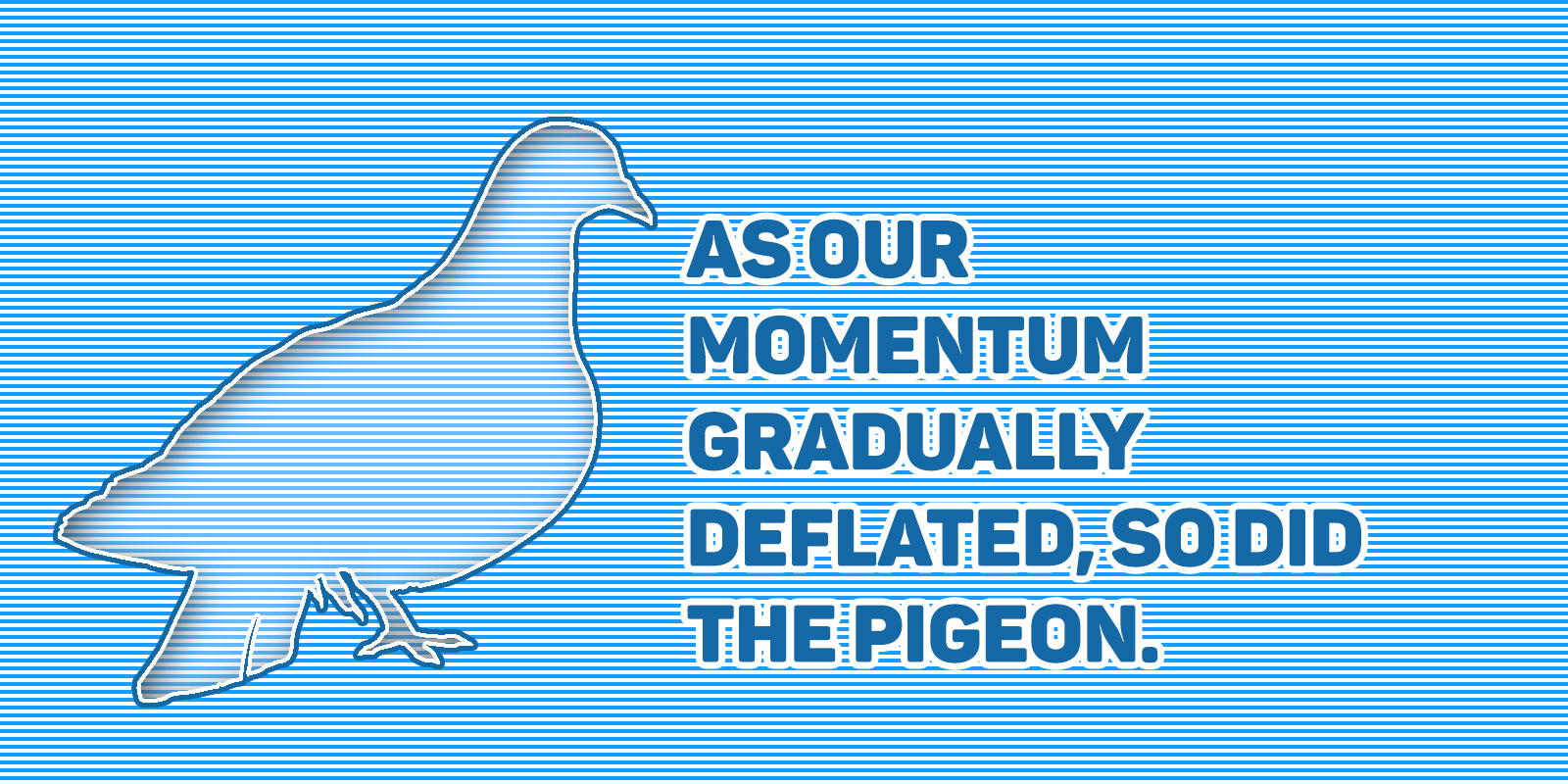 I looked up from the screen, rubbed my eyes, and looked toward the window. The signs were gone again. And the pigeon was, of course, still there.

“Screw it,” I said abruptly, shoving my chair back. I grabbed a stiff piece of cardboard, marched to the window and unlatched it. Took a breath, and shoved upward.

A deafening noise sounded immediately, but it wasn’t an alarm; it was the screeching of hardware that hasn’t had to operate for many years and considers it an outrageous imposition. But move it did, and finally it was just me and the pigeon out on the fire escape.

I half-shook, half-slid the cardboard underneath. The pigeon’s body weighed not much more than a breath. I said a word of secular benediction, flipped the cardboard up… and the mortal remains of Columba livia tumbled and disappeared into the darkness. Wherever it landed, it did so noiselessly.

I climbed back into the office, shut the window and went back to writing while I waited for the police to come. Or building security. Or a pissed-off building manager.

Nobody showed. There was no alarm. There never had been. I finished my draft, printed it off and went home.

Do you know how The Picture of Dorian Gray ends? Gray slashes the portrait, and promptly dies — a desiccated husk, while the portrait has been restored to its youthful glory.

My story ends differently. The speech went through several revisions, but when the candidate finally delivered it, she knocked it out of the park. She had found her voice, and I had found a way to write to it.

And starting with that speech, things started to break our way again. We had the wind beneath our wings—an expression that now conjured only positive, non-morbid feelings. There were ups and downs between that speech and the final vote, which she won, but I remember that  speech as the moment her campaign turned around.

It’s not as though I think that dumping a dead pigeon off a fire escape in the early hours of the morning won the election. It’s more that I couldn’t do my best work with that distraction hanging around… and maybe just as distractingly, with my resentment over not being able to do something about it.

Politics, Otto von Bismarck once said, is the art of the possible. And often “the possible” is a pretty narrow range of options. I couldn’t do anything about other candidates entering the race. I couldn’t make my candidate be a seasoned expert speaker. But I could sure as hell evict that pigeon from our fire escape.

“The art of the possible” is sometimes a good description of speechwriting, too. One client may not be able to pull off a call and response; another has never seen a punchline they couldn’t stomp to death; still another refuses to share any personal anecdotes, and thinks showing emotion is being gimmicky. You can coach all you like, but sooner or later you have to write for the speaker you have, not the speaker you wish you had.

And you do the very best you can for that speaker, within your window of possibility.

*In a field known for being male-dominated, it’s striking just how many women I’ve been lucky to work for.

← Illuminate: the exciting new book from Nancy Duarte and Patti Sanchez When your audience isn't feeling the Bern →