The State of the Union is social 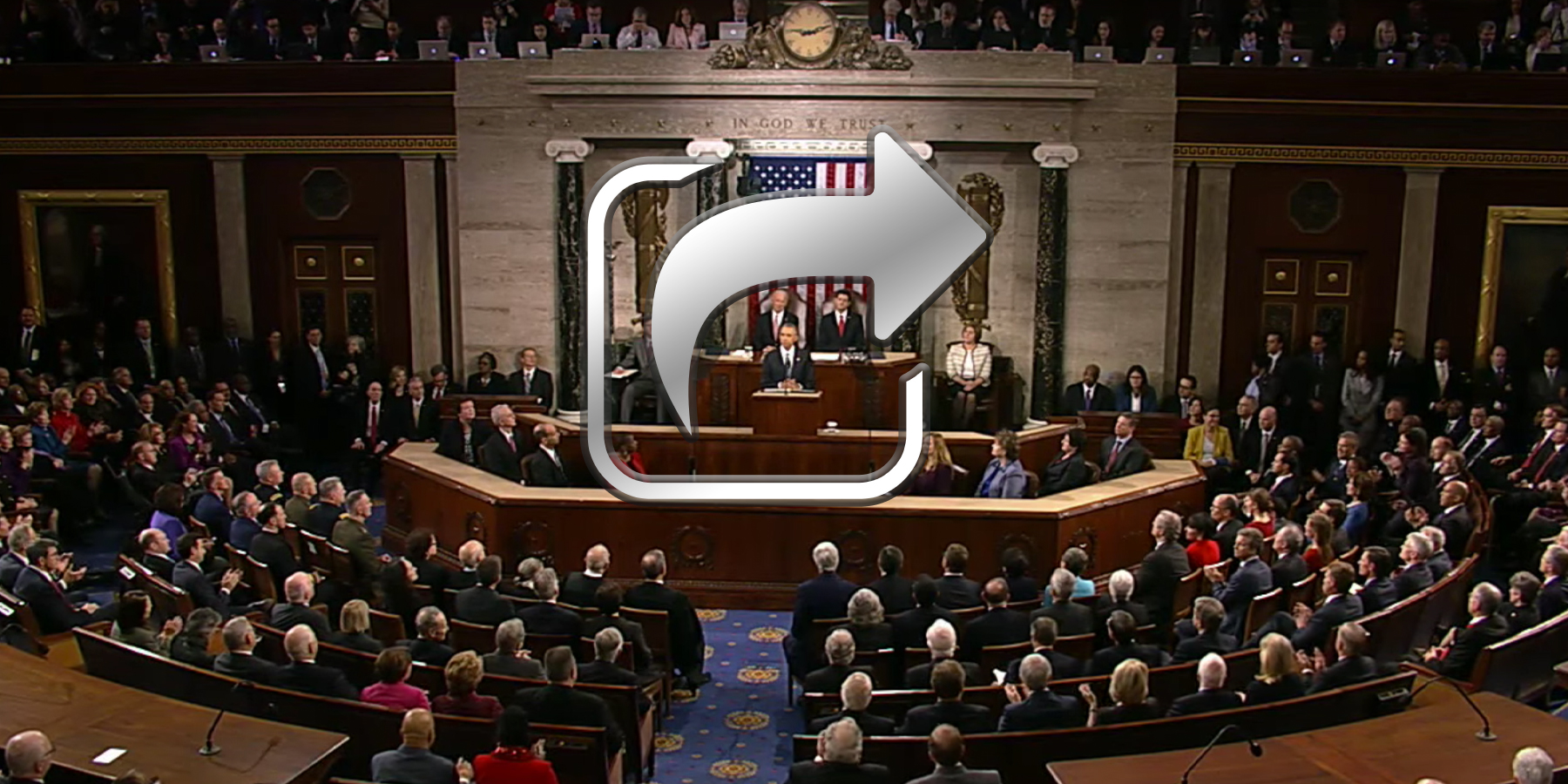 There’s a point I’ve been hammering for years now (and I do mean years): the rise of social networks and easily-shared media should mean a profound change in the way speakers and speechwriters approach our craft: at once both broader in scope and more conversational in approach. I call this approach the social speech.

But there’s still surprisingly little uptake. Maybe speakers put their Twitter handle on an opening slide, or post their deck to Slideshare, but that’s often about it.

Maybe that’s you. And maybe the thought of getting more social with your speaking (or speechwriting) has intrigued you before, but you weren’t really sure where to begin.

If so, then have a look at how the Obama White House handled the State of the Union speech last week.

Granted, they had an audience far larger than anything you or I are likely to tackle (this week, anyway!). But the techniques they used to engage the audience — including, crucially, the audience that wasn’t tuned in to the speech itself — can apply to the more day-to-day speeches we’re accustomed to handling.

Writing on Medium, Obama’s Chief Digital Officer, Jason Goldman, pointed to a wide range of ways the White House planned to extend the SOTU beyond the walls of Congress and the reach of TV. The goal: “meeting people where they are.”

But “where they are” varies a lot, he added. “Even people following on two screens don’t just flip back and forth between a TV and a smartphone. We jump from different social media platforms.”

Hi, everyone! Press Secretary Josh Earnest here. I'm taking over the White House Instagram account today to give you a behind-the-scenes look as we prep for President Obama's final State of the Union address. Right now, I'm reviewing my prep materials ahead of today's press briefing with the White House Press Corps, where I'll be taking questions about tomorrow's speech – among many other topics. Don't forget to tune in tomorrow night at 9pm ET. #InsideSOTU –Josh

All the platforms. (Maybe not Peach.)

The White House drew on their already-formidable array of online presences with “video excerpts released in real-time on Facebook and Twitter” and media ranging “from live GIFs on Tumblr to 6-second videos on Vine and photos on Instagram.” The speech even got its own trailer video, starring the President.

True wonks could dive into Obama’s past SOTU speeches, supplemented through the Genius web annotation service; visitors could add their own annotations, with the prospect of perhaps having theirs highlighted by the White House. And a partnership with Amazon Video made those speeches available for viewing through the company’s app, if the White House YouTube channel didn’t suit.

Once the speech was underway, the official SOTU web page became a hub, hosting shareable video clips and graphics elaborating on each of the four major themes of the speech. Especially worth noting: each section has a e-mail list subscription form — neatly pre-identifying a relevant interest area of the folks signing up. 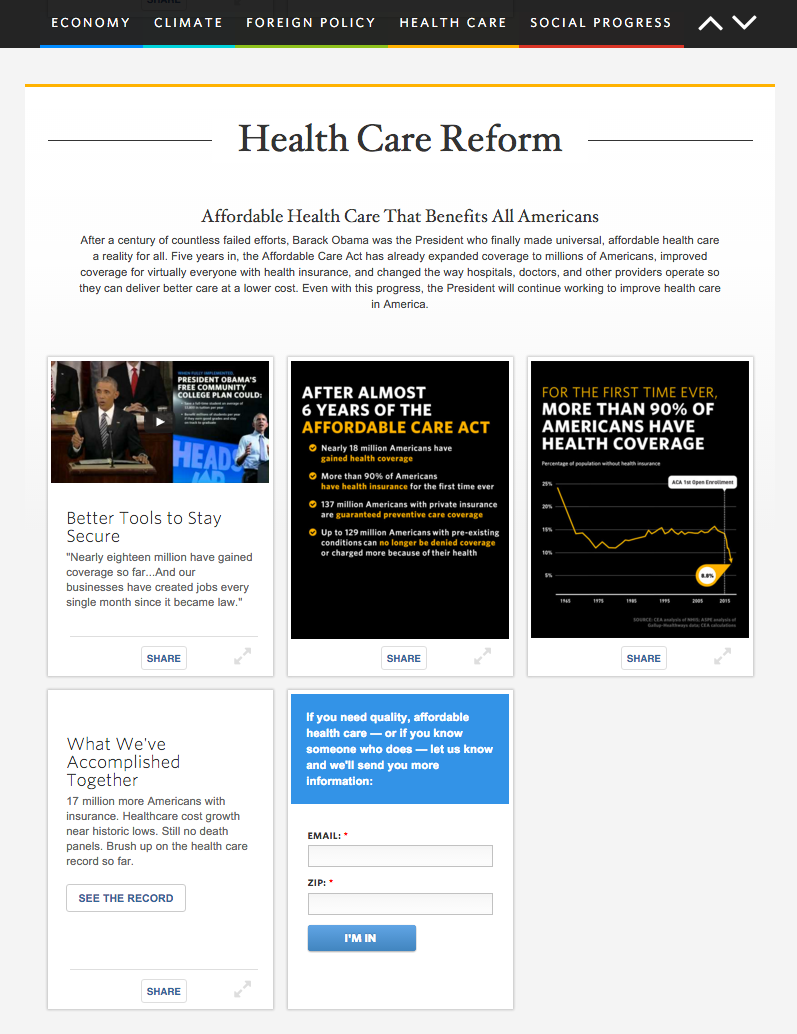 After the speech, the White House kept the ball rolling. They quickly rolled out an enhanced version of the speech on YouTube, with crisp, nicely-designed graphics illustrating and underlining the President’s points. A day later came a day-long Twitter chat with administration officials and the First Lady, anchored on the hashtag #BigBlockOfCheeseDay. (That comes from a fictional White House consultation event on The West Wing — an indication that Obama’s web team knows at least part of its audience very, very well.)

We're ready to kick off #BigBlockOfCheeseDay! @LaborSec Perez is here ready to take your questions. pic.twitter.com/0BPJBevUKf

And with a cancer research initiative as the speech’s most prominent announcement, the page links to a “share your story” feature with a form where visitors can tell their story to Vice President Joe Biden.

Did all that work pay off? Obama’s team were probably doing far deeper measurement than likes and shares — but at least by those superficial metrics, there was plenty of engagement: 32,000 likes for one Instagram photo, 1,300 likes and ten times that many views for the YouTube trailer. 921,000 views, 27,000 likes and 15,000 shares of the full SOTU video on Facebook. You’d want to go a lot deeper than that to measure success, of course, but given that they’ve done a similar full-court social media press during past SOTU addresses, we can probably assume they have… and were happy with what they saw.

Toward a more social speech

For speechwriters, speakers and communications shops who feel jazzed about this and want to try something similar, I hope you do. Here are some ways to put the same kind of approach to work:

One thing you can do that’s a lot harder for the White House is real conversation (which, apart from #BigBlockOfCheeseDay and post-SOTU interviews with three prominent YouTubers, they didn’t really attempt).

Whether that’s soliciting anecdotes from your LinkedIn network, previewing speech themes in a blog post and elaborating in comments, inviting and using image submissions via Facebook or Twitter for your slides, addressing the venerable Twitter backchannel during a presentation, or taking part in ongoing group discussions on your network of choice, there are plenty of opportunities to turn your speech from a one-way monologue into a richer, broader and more enduring exchange.

← How Obama's messy closet saved the State of the Union speech Origin story: how I became a speechwriter →