What makes a speech’s call to action powerful? A theory of change. 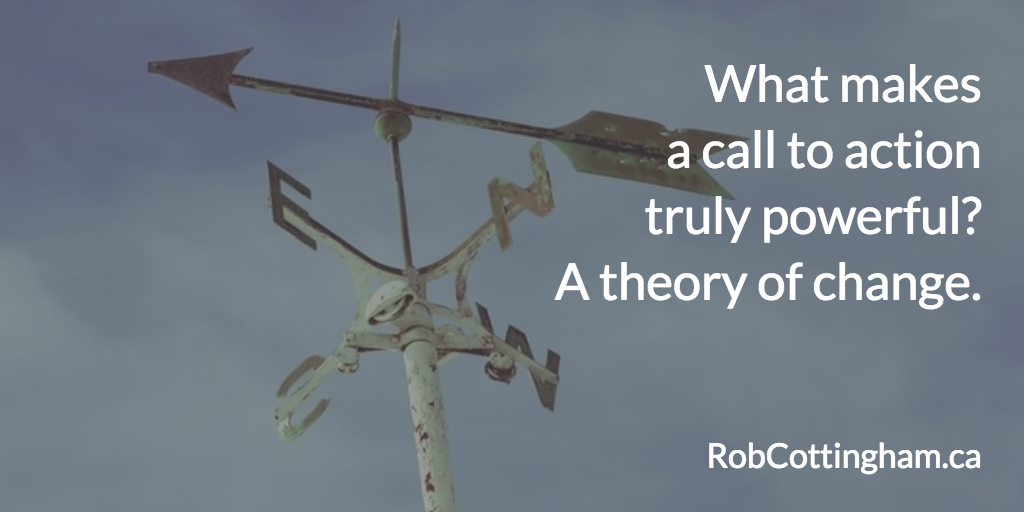 Inspiring speeches don’t just persuade people of a point of view; they urge the audience to action, and show them how that action will produce meaningful progress toward a better world.

Here’s an example. After I tweeted this column by the Vancouver Sun’s Daphne Bramham (“We need citizens, not just taxpayers and bookkeepers“), Ryan Merkley pointed me to this 2011 TEDx talk by former Toronto mayor David Miller.

Miller makes a compelling case for reclaiming the language of “citizen” over “taxpayer”, and he could have ended there — as a lot of TEDx talks do.

But then he asks his audience to do something: to challenge every media reference to “taxpayers” with a letter or email. He sets out a theory of change: that once enough people do that, reporters and commentators — and eventually politicians — will begin changing their language as well. And that, in turn, will help to shift the political discussion so that it focuses less on keeping taxes low, and more on the common good.

He isn’t asking his audience to take to the streets, or fundamentally alter their lives. But he isn’t just asking them to take a purely symbolic step, either. By seamlessly connecting his call to action to his argument, through a clear and coherent theory of change, Miller leaves his audience inspired and ready to do something they believe will improve their community.

Which is a pretty big part of citizenship.

← Follower-bombing as a political prank TOS 2X9 "The Apple" →