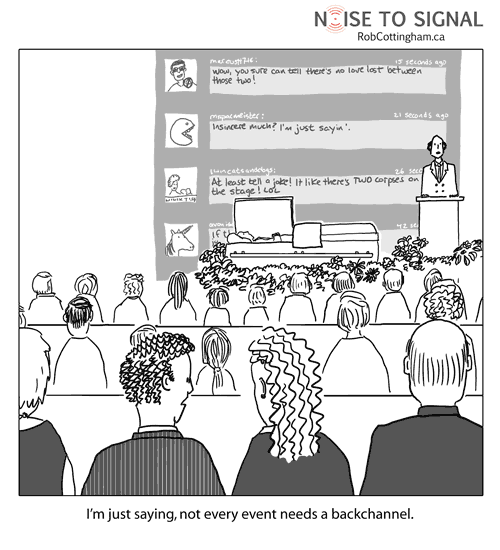 Probably no need to mention that this cartoon was inspired by the Web 2.0 Expo debacle involving danah boyd, a Twitter backchannel projected onto a giant screen behind her, a speech that faced an uphill battle from the get-go, and a few audience members with some impulse control (and other) issues.

There’s a fascinating renegotiation going on between audiences and speakers. Twitter and backchannels are part of it, but I suspect something deeper is afoot. There’s a revolution sweeping all forms of communication – ask anyone who works for a newspaper or a record company – and maybe we shouldn’t be surprised that even something as seemingly timeless as public speaking would be affected.

But that doesn’t mean we have to be jerks about it.

← And with a shift-zero, they saved humanity That's what friends are for →