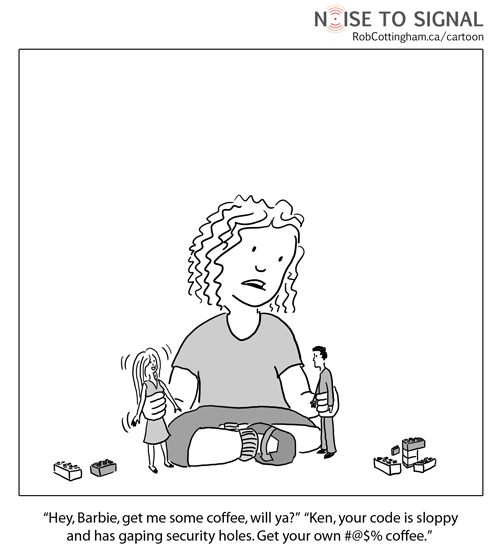 Instead of repeating what many others have said, and better than I could (holy crap, that book was sexist!) I have a few thoughts on BarbieBookGate that touch on Mattel’s response. I’ve posted them over at Medium; the gist of it is that “when Barbie does a better job of talking like a human being than her makers do, something’s gone wrong.”

Barbie: the book and the Brand

One other thing: I feel for the author, Susan Marenco, who says her assignment was to write about Barbie as a designer, not a computer engineer, and that she badly wishes she’d made one of the programmers female. “I want people to know I am conscious of [stereotypes of women in technology],” ABC News quotes her. “If I was on deadline, it’s possible stuff slipped out or I quietly abided by Mattel without questioning it. Maybe I should have pushed back, and I usually I do, but I didn’t this time.”

We may never know how much of the Barbie-as-digital-klutz stuff was her idea, and how much was the Mattel’s. I know nothing about her beyond the fact that she’s worked in tech herself. But I know how much of myself I feel I have vested in my writing, and I’d have had a very painful past few days if I’d been in her shoes.

Cartoon: These teeny, tiny boots were made for walkin’

← I believe crash reports should be worth reading (8) Appstroturfing (n): when a company uses its employees to pump up their app's ratings →