More than a quarter century ago, I saw my first Macintosh. One of my roommates got it on loan from an Ottawa computer store, part of a promotion where you could borrow a Mac for a week and try it out.

“This is how you’re going to draw cartoons from now on,” he said, opening up MacPaint and handing me the mouse. I clicked and dragged experimentally.

I’d love to tell you that my jaw dropped, and that I saw the future there and then. But what actually happened was this: I watched as the pixels trailing the mouse gradually approximated a blocky drawing of some guy, clicked around a few more times, then handed the mouse back to my roommate with what I hope in retrospect wasn’t a condescending smile. (It almost certainly was.)

Yes, the Macintosh was dazzling. But for the life of me, I couldn’t see how it was an improvement on that XT clone running MS-DOS in my parents’ basement.

Here’s my mistake: I saw the product. But I didn’t see the change it represented.

A little more than a decade later, NOW Communications brought me into my first Mac-focused workplace, just as Steve Jobs was returning to the top at Apple. A small gaggle of us headed south to Macworld in January 1998, where Jobs introduced the first iMac.

And then my jaw did drop. He was doing away with the floppy drive. He was releasing a computer that didn’t look like a computer. And the “i” in “iMac” stood for “Internet.”

From then on, I tried not to miss a single SteveNote. I never got to see one in person (not even at that Macworld I attended, where the lineup was prohibitive), but I watched them online (in QuickTime, naturally) and, once, at a simulcast in Vancouver. 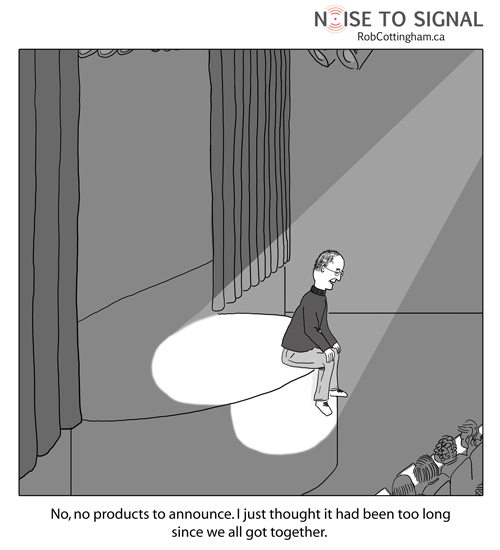 That was where he announced iTunes. And later that year, he followed it up with the iPod. Then a few years later, the iPhone. And the iPad.

iTunes drew applause, as I remember, but the iMac, iPod, iPhone and iPad announcements all drew their share of derisive snorts from commentators predicting that this would be the one that sank Apple for good. “It’s derivative.” “It isn’t fully-featured enough.” “It’s a crowded marketplace.” “Life without 3-1/2-inch floppy disks isn’t worth living.”

← If you see something... Three handy tools for engaging on Google+ →