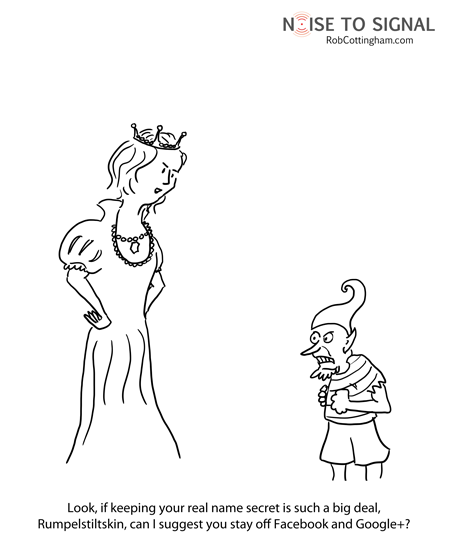 With all the recent discussion over identity and anonymity online, I suppose this is probably the right time to tell you that I am, in fact, not Rob Cottingham.

He and I met shortly after he completed his journalism studies in 1988. I was, at the time, being pursued by creditors who were in the, let’s say, unregulated financial sector.

Our paths crossed in a campus bar, where we remarked on our uncanny resemblance to each other. After a few drinks, I was able to persuade him it would be kind of a lark to switch identities just for a few days; I told him I was an audio hobbyist and could finish a radio piece he was working on in no time, and that he could take on my daytime job of reviewing luxury hotels.

He jumped at it, not realizing that my job was – of course – a complete fiction. The last I saw of him, he was leaping from the roof of one OC Transpo bus to another, pursued by three large men with crowbars. I understand he was living under an assumed name in Bucharest a few years after the fall of the Ceaușescu regime, but apart from that I have no idea how he made out.

I suppose that, from now on, you should call me by my real name, George Clooney.

Ahh. Feels good to get that off my chest.