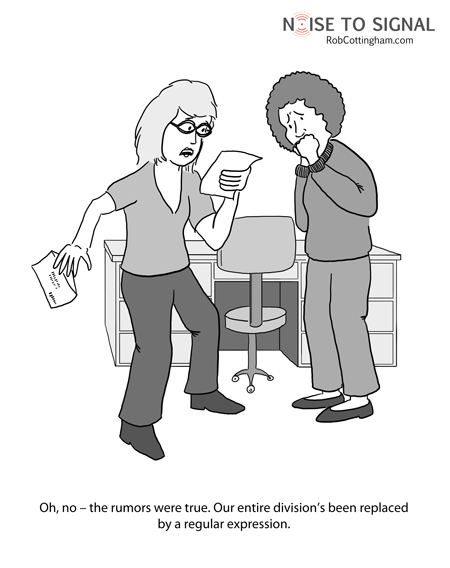 There is no greater challenge to my geek credentials, no more damning indictment of my weak kung fu, than the fact that I can’t write a regular expression to save my life.

I know, I know. They’re a command-line ninja’s shuriken* of choice. If Linux is dough, they’re the KitchenAid**. They’re loyal and loving, and they’ll jump up and do tricks for you if you only know how to ask them.

But I don’t know how to ask them, because I only step into the land of regex once or twice a year. Every time the need comes up, I have to re-learn regular expressions more or less from zero. The last time it happened, I broke down and bought an O’Reilly book for my iPad. (This is my usual strategy, based partly on the hope that the knowledge will seep into my brain osmotically through my fingertips while I’m playing Cannibal Bunnies.)

And so I found myself plunging back into the book a few days ago, and thinking that there’s probably a German word for the sensation of learning a piece of information, recognizing that it’s something you used to know, and realizing – with some wistfulness – that you will soon forget it again.

I’d probably know what that word is… if only I spoke German more often.

* N.B.: I know even less about martial arts than I know about regular expressions.

** Wait, that’s a trademark. Instead of “KitchenAid,” I’m supposed to say “KitchenAid™ stand mixer.” I’d do a search-and-replace on it… if only there was some concise and flexible means for matching strings of text, such as particular characters, words, or patterns of characters. 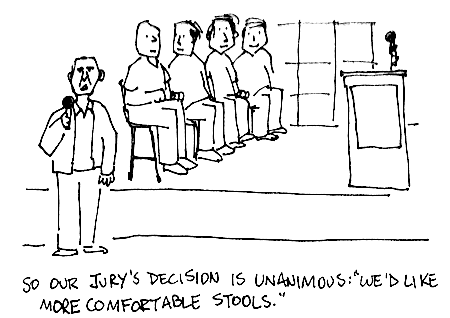 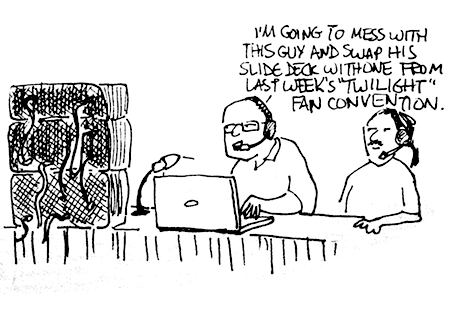 Howdy, folks – I’m in Portland, OR at OSCON: O’Reilly Media’s annual gathering for the open-source community.

The convention itself starts tomorrow, but there have already been two days of tutorials and summits. I caught today’s cloud computing summit, which included a series of debates with a jury deciding such issues as whether open APIs prevent lock-in, whether we need standards in The Cloud, and whether the tarsier is a cute mascot or the cutest mascot.

One little touch that I love: the ribbons you can add to your badge. With most conventions, that’s fully in the control of the organizers: you get a ribbon that says “Sponsor” or “Speaker” or “VIP” if and only if you merit it. At OSCON, you get your choice of everything from “Database Doctor” to “We’re Hiring”… or a blank ribbon and a Sharpie.

There’s no question, though, that this conference’s main target audience is people whose tech chops exceed mine by a light year or so. That’s great – I like to feel challenged, and there’s no question most of the sessions I’m attending will do just that. And that makes me especially delighted that Alex and I will be presenting tomorrow on how we’ve been taking Social Signal’s business processes open, and the surprises, pitfalls and windfalls that we’ve encountered. 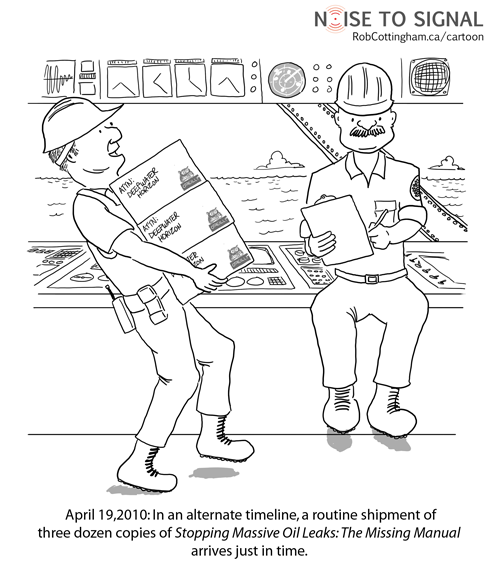 If the planet came with a manual, I have to think it would carry some pretty serious warnings about certain activities:

Offshore petroleum drilling: THIS IS NOT A SUPPORTED FEATURE OF PLANET EARTH. Using this feature may void your warranty and may cause issues including – but not limited to – unavailability of the Plenty-O-Shrimp feature, increased beach viscosity and unexpected dolphin termination. UNDER NO CIRCUMSTANCES SHOULD YOU BURN ANYTHING OBTAINED THROUGH THE USE OF THIS FEATURE. This can lead to your system running at dangerously high temperatures.

Added: Oh, curse of knowledge, you scamp. When I wrote this, it didn’t occur to me that people might not know David Pogue is the guy behind the absolutely wonderful Missing Manual series, published by O’Reilly Media.