There’s a lot to like about Cyber Monday – the day online retailers try to woo us out of the big box stores and into virtual ones – over Black Friday.

First, you can do Cyber Monday in your pyjamas. Hell, you can do it with no clothes at all. Black Friday (as the court order the mall sent me makes very clear) is not pants-optional.

Second, number of people pepper-sprayed by a competing shopper on Cyber Monday: zero. On Black Friday: at least 20. 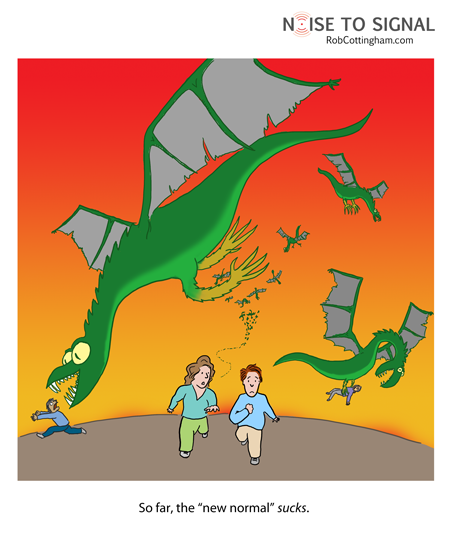 When it came to hope for the future, I was raised on a mixed diet: the optimism of Star Trek and Isaac Asimov, and the stark threat of nuclear holocaust.

And since then, I’ve been whipsawed between the threat of ecological catastrophe, pandemic flu, peak oil, fundamentalism, and global economic collapse; and promising things like renewable energy and the outbreak of pro-democracy movements.

One thing that’s been firmly planted on the hope side of those scales is the Internet. Ever since I first clicked on a hyperlink, I’ve been seized with the net’s ability to connect people, creativity and ideas across the limitations of national boundaries, geographical distance, language, class, religion and even open warfare.

And I don’t think it’s worth severely compromising that ability just to preserve a dying business model… even one that helped to bring those Star Trek episodes to me. I say this as a cartoonist who gets pretty wistful reading about the days when there were loads of high-paying (or just “paying”) markets for cartoons and freelance writers. I’d love that.

I just love the free and open Internet more.