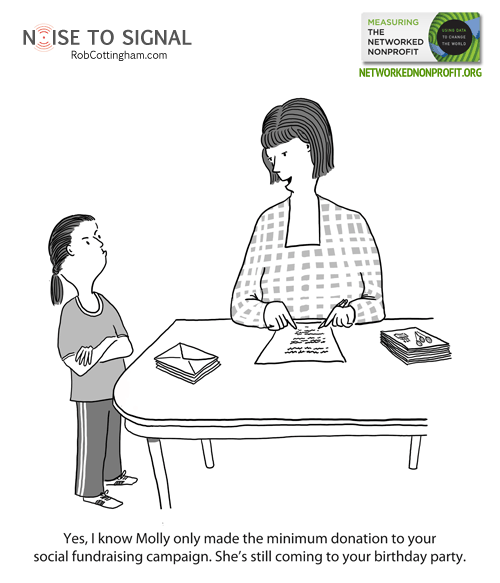 Over the next several days, I’m posting cartoons I drew for Measuring the Networked Nonprofit: Using Data to Change the World, by Beth Kanter and Katie Delahaye Paine. I blogged about the book a while ago on Social Signal, explaining why I love it and why I think you should go buy a copy right now.

Chapter 7 is titled “How to Turn Your Stakeholders into Fundraisers: Social Fundraising and How Measurement Can Make It More Effective”. (After seeing an early outline, I wanted to call it “Turning Philanthropy into Philanthro-we“. How history might have changed if I’d ever hit “send” on that email.)

Beth and Katie suggest defining social fundraising as “people asking personal networks to give support.” If you’ve ever had a Facebook notification that a friend suggested you donate to a particular organization on Causes, or seen any of the endlessly inventive campaigns run by supporters of charity: water, you’ve seen social fundraising.

And it can work well. But taking it beyond just “let’s ask our supporters to put a widget on their blogs” requires fundraising expertise, social savvy, some decent technical chops… and smart measurement. If the Obama campaign’s message and tactics seemed to be constantly evolving, it’s because they were – in response to the data they’d analyze obsessively over what kind of appeals worked on whom, when, and under what conditions. (To put it in terms that I can relate to, “The Borg have adapted to our multi-phasic shielding, Captain – their last three appeals got through untouched and caused major donations on Decks 12 through 15.”)

Segmenting your audience is key, too. Katie and Beth look at how Blue State Digital’s segmentation strategy dramatically boosted the chances that an email appeal from Autism Speaks would get opened by its recipient. (I love segmentation purely on the strength of the names marketers like to give their segments: “Furious Experimenters,” “Jazz-Inflected Repeat Adolescents” and “Regret-Tinged Revenge-Seekers”. Half of them sound like they were lifted from the pages of an Audubon field guide; come to think of it, the notes that accompany segmentation reports often have that observed-from-inside-a-bird-blind feel to them.)

And as the authors point out, the return you get won’t just be in the form of credit card authorizations. You’ll have a larger, more engaged network of supporters, ready to take actions ranging from advocacy to, potentially, organizational leadership.

(An aside: Turning stakeholders into fundraisers was thought for a long time to be fraught with danger. Sure, you’d probably get some lovely networked fundraising… but what if it went wrong? What if you ended up with fund-holders and stake-raisers? Almost inevitably, pundits warned, you’d have an angry stake-wielding crowd chasing people holding fistfuls of cash. But then it actually happened, and was called Occupy Wall Street. It turns out that crowd just uses their stakes to hold up hand-lettered banners and enormous effigies representing leading economists from the Austrian School, chanting “Hey hey, ho ho, slavish adherence to the ideas of Eugen Böhm von Bawerk has got to go!”)