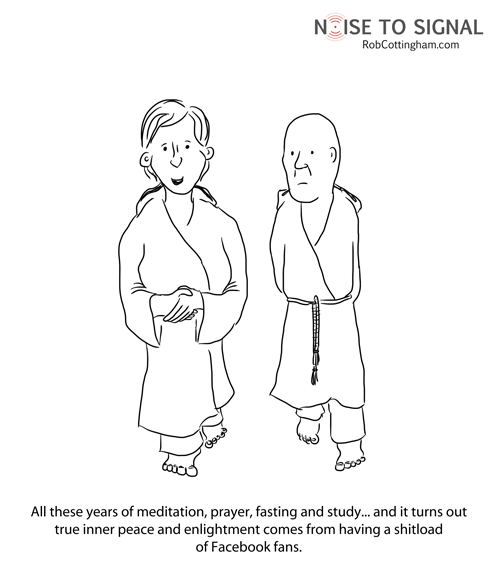 I don’t believe in chasing metrics for their own sake. I really don’t.

But for the past month, Noise to Signal has hovered tantalizingly close to 2,000 fans on Facebook, and dammit, I really like it when the cartoon reaches more people. If an arbitrary number can help make that happen, then by god, I’ll embrace that arbitrary number and tickle it under its chin.

So I posted that if we can crack that 2,000-fan barrier tonight, I’ll post next week’s cartoon today:

I have a cartoon that I’m planning to post next week. But if you fine people can convince 18 more people to like the page and crack 2,000, it’ll go live RIGHT AWAY. (Why? Because I like round numbers and because my subconscious is convinced that more Likes mean I won’t die alone and unloved someday.)

And my old friend Kevin Marsh from my Queen’s Park days replied that he might be game for it if I post a cartoon about my subconscious. And here it is.

(In case you’re wondering, yes: I went back and forth over whether to say “shitload”. I ultimately went with it because I think it’s funny as hell when a monk says “shitload.” In many ways, I never really stopped being 12.)