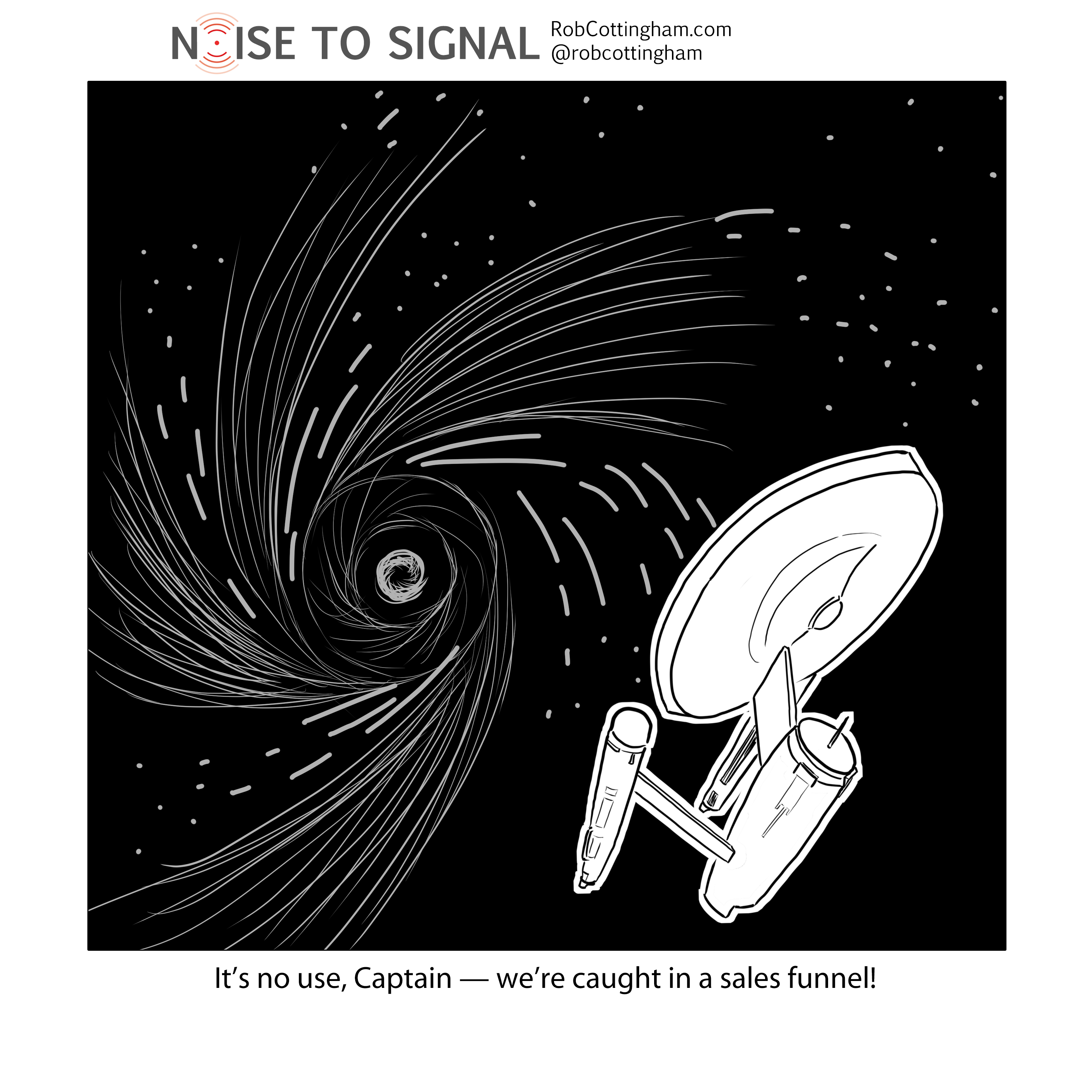 The most pernicious thing about marketing these days is how the lines of commerce and social interaction have blurred. You may think you’re having a pleasant online conversation with someone; they think you’re agreeing to be bombarded with email offers until you succumb and hand over a credit card number.

My wife and I have had this happen with salespeople before, where we’d all spend time together talking about anything and everything other than the transaction at hand because they felt a real connection with us, a genuine, human meeting of the min—… oh, wait, you aren’t ready to make a purchase? Ciao. Out of the sales funnel you go.

We should have known better. As a Toyota sales rep told us as he ushered us out the door once it became clear their lack of competitive financing was a deal-breaker, “getting coffee together sometime” doesn’t pay his mortgage. Fair enough.

But we weren’t any more naive than the countless folks out there interacting with brands and their happy, chatty online personas. All that banter is great, but at the end of the day, it had better convert enough of the banterers to justify itself. For many brands, conversation is Scheherezade, staving off its execution with sales instead of stories.

There’s nothing wrong with that, except we consumers forget that, and most businesses are perfectly happy to let us. And then once in a while we catch a jarring glimpse of the skull beneath the skin. All it takes is an obtusely crass use of sales copy or an unartful bit of fake urgency, and for a moment we remember that we only imagine we’re friends — that the relationship goes contact, lead, customer; not acquaintance, friend, BFF.

That’s when you realize you aren’t in a virtual coffee shop or digital agora, but instead in the cold, rapidly narrowing confines of a sales funnel, being pulled headline toward conversion. That term has always struck me as the kind of euphemism for “painful disintegration” that some authoritarian alien civilization would use—right up to the point where Kirk overthrew them and remolded their government into something more like the Riverside, Iowa town council.

I’d actually wonder how Kirk would react to the discovery that a relationship had all been an elaborate charade, except we already know: he’d cure the ambassador’s daughter of Vegan choriomeningitis. I like to think he’d also then unfollow the ambassador and delete his GideonNet profile. 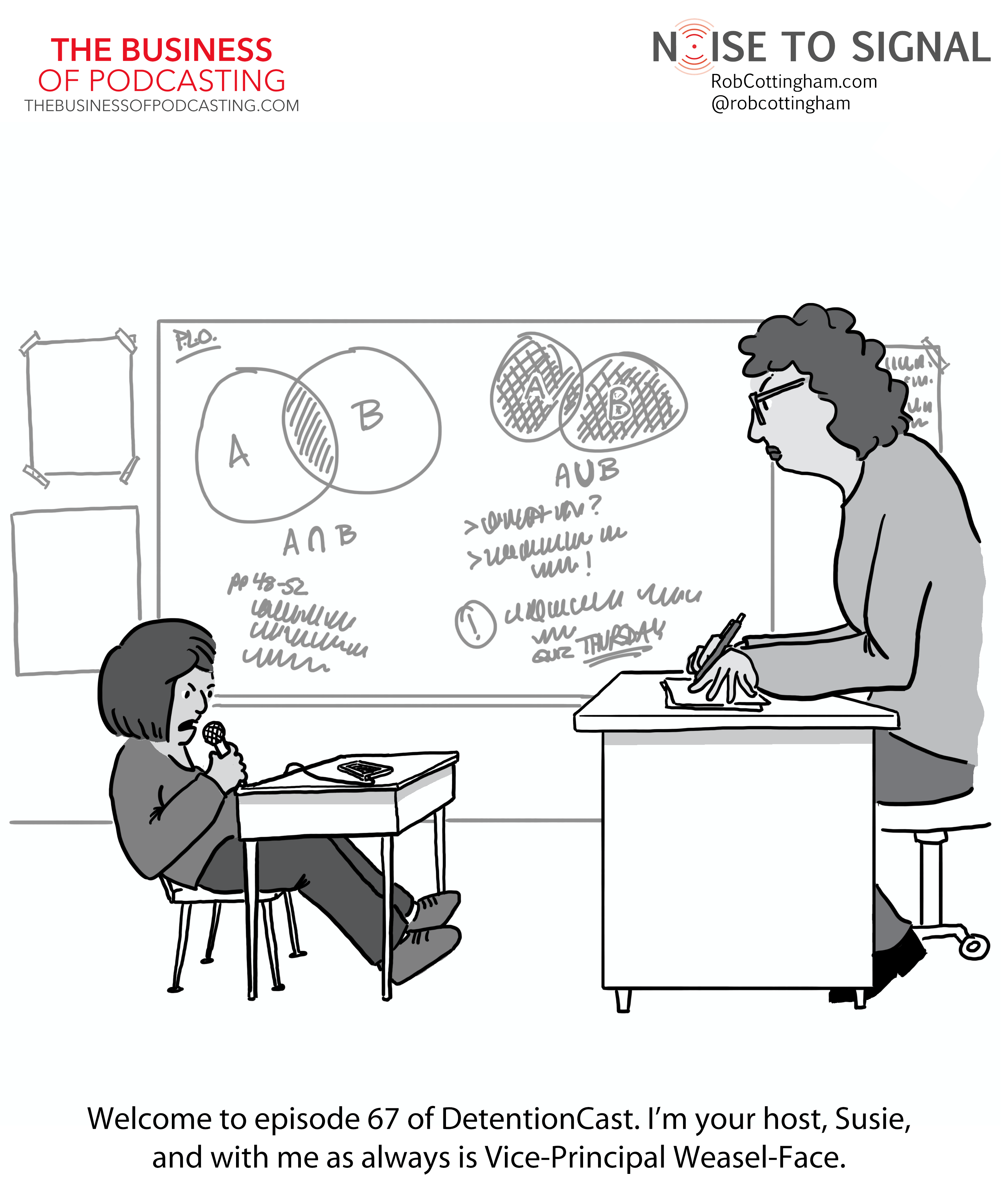 Here’s the seventh in a series of eight cartoons from the fab new podcasting book, The Business of Podcasting by Donna Papacosta and Steve Lubetkin. Check back every Monday for the latest one!

There isn’t necessarily a great business model for speaking truth to power, Susie, but podcasting at least makes it a lot less expensive.

One of my favourite podcasts on that count is Women at Warp, “a twice-monthly podcast where four women talk about Star Trek, its representations of women, contributions of women behind the scenes, and other fun Trek topics.” If you’re on the geekier side of the fence (heck, you’re here, right?), and you’ve been looking for a podcast that’s great fun while treating issues like underrepresentation, exclusion and overt misogyny seriously, I hope you’ll give it a listen.

We’re getting down to the wire on this run of cartoons; I hope you’ve enjoyed reading them as much as I did drawing them. This was my second-favorite of the bunch. Next week: my personal fave! 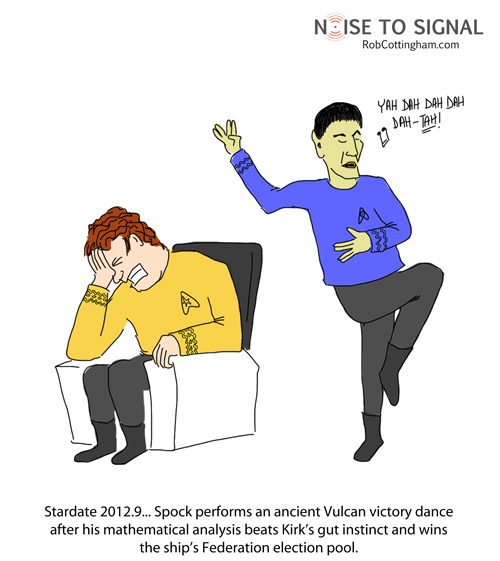 Captain’s log, sup-… sup-… -lemental. OK, had a drink or two with Scotty and Bones while we watched the returns. Played a drinking game: every time you saw Wolf “359” Blitzer get excited about a result with fewer than 1% of the votes counted, you took a shot. We were hammered before the polls closed on Altair VI.

My gut told me it was going to be a huge sweep for Jonathan Archer Jr. (and forget that third party guy – it’ll be a cold day in hell before an Efrosian becomes president!) But in waltzes Spock with his, his, all his charts and graphs saying “Logic dictates a decisive defeat for Archer” and we just laughed.

So now it’s six hours later and my gut’s telling me something different, mainly that the Denebian burrito I had was a bad idea, and Scotty and Bones and I just lost three standard months’ salary in the election pool. And Spock’s just insufferable about it, saying he’d be happy to walk me through the algorithm in a simplified way that humans can understand.

But what he doesn’t (burp) – ‘scuse me – what he doesn’t get is that my gut was right. If it wasn’t for that ion storm that hit sector V-5, which totally killed Archer’s momentum, it’d be Spock pawning his communicator to Harry Mudd, and me booking two weeks in a beachside cabana on Risa. Also, Andorians and Vulcans reeeeaallly love to vote against the human, y’ever notice that?

‘kay. Little tired now. Jus’ gonna lie down for a… 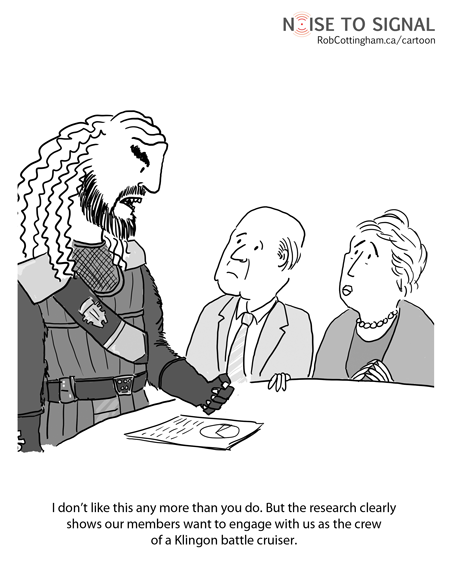 Open Community is a terrific new book from Lindy Dreyer and Maddie Grant for associations that want to dive into the world of online community – and it includes cartoons from yours truly. To celebrate its launch, I’m running a new cartoon from the book every day this week.

“This above all, to thine own self be true,” said Polonius… shortly before winding up skewered by one Prince Hamlet in the arras, prompting centuries of snickering by high school students. (Funny thing: Mr. To-Thine-Own-Self died because of concealment and mistaken identity; a little transparency on his part could have made a big difference.)

But for organizations that want to engage with their audiences all Wikinomics-like, how to be true to yourself isn’t necessarily obvious. How do you maintain an authentic identity while releasing significant control to your members and supporters? Where’s the line between openness and allowing your supporters to define you and your mission?

The answer will vary – dramatically – from organization to organization. The important thing is to know going in where your line is… so you don’t wind up trying to be somebody you’re not. As countless family sitcoms have taught us, that may be a road to zany complications, but it won’t lead to authentic relationships.

(Baffled by the title? Find out about the nptech tag here.)