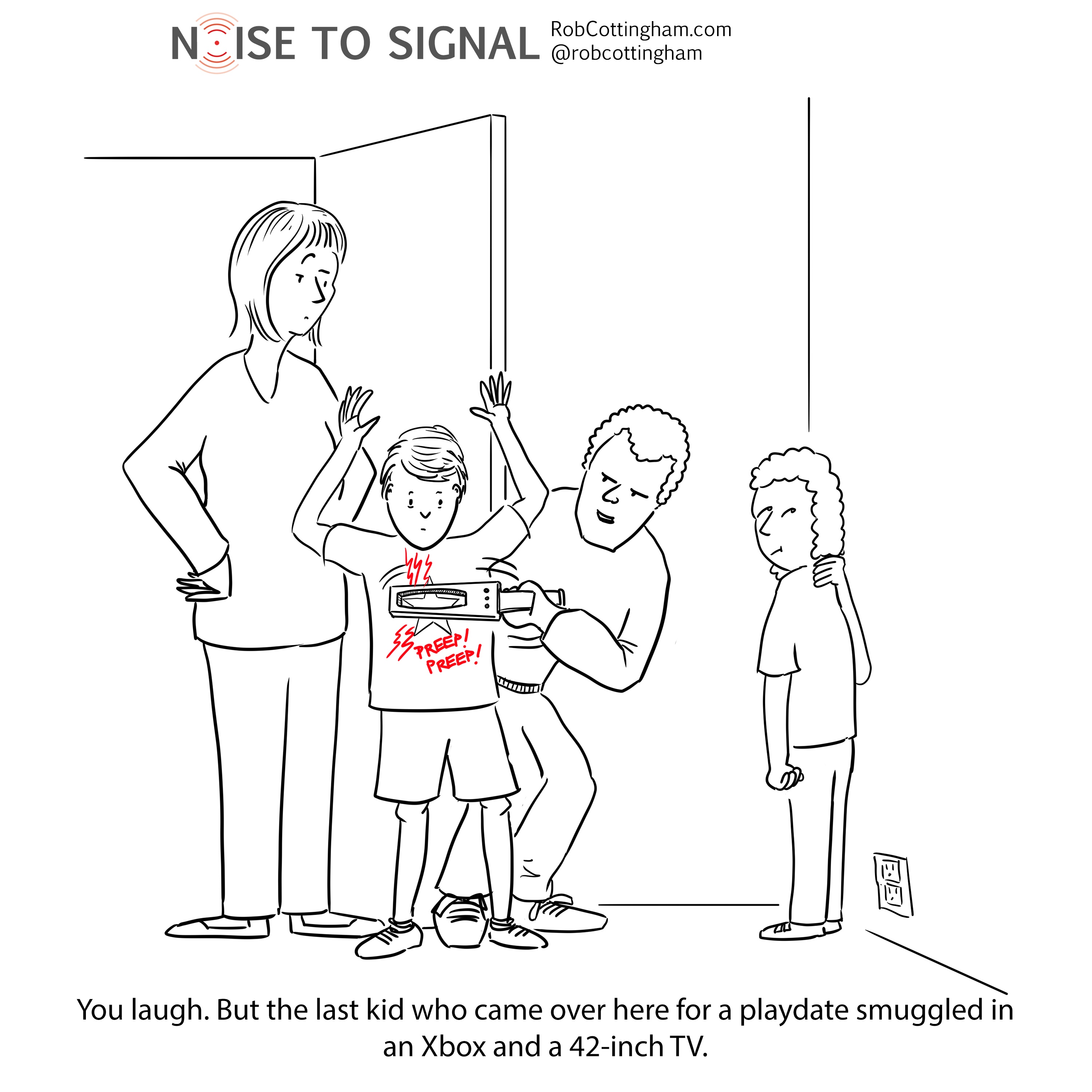 It’s amazing the stuff that gets into your house despite your best efforts to shape the influences in your kids’ lives. Barbies. Disney. Pokémon. Tambourines.

When my kids were younger, the main vector was well-meaning relatives giving presents. But now that they have a social circle, it’s their friends who act as the conduit for all that’s awful, counter to our values or just unhelpful. Thanks for bringing that Nintendo 3DS over, Miles. Thanks a crapload.

And the truth is, you can’t shield your kids completely, and you can’t shield them forever. Your best, most durable hope is to instill strong values and foster a rapier capacity for media criticism.

And maybe install one of those TSA body scanners at your front door.

I drew this and six other cartoons about parents, kids and tech for Alexandra Samuel’s session at SXSW 2016, The Myth of the Family Tech Market. It’s based on her two-year study of how more than 10,000 North American parents manage their kids’ interactions with digital technology.

Find out more about Alex’s work around digital parenting here. 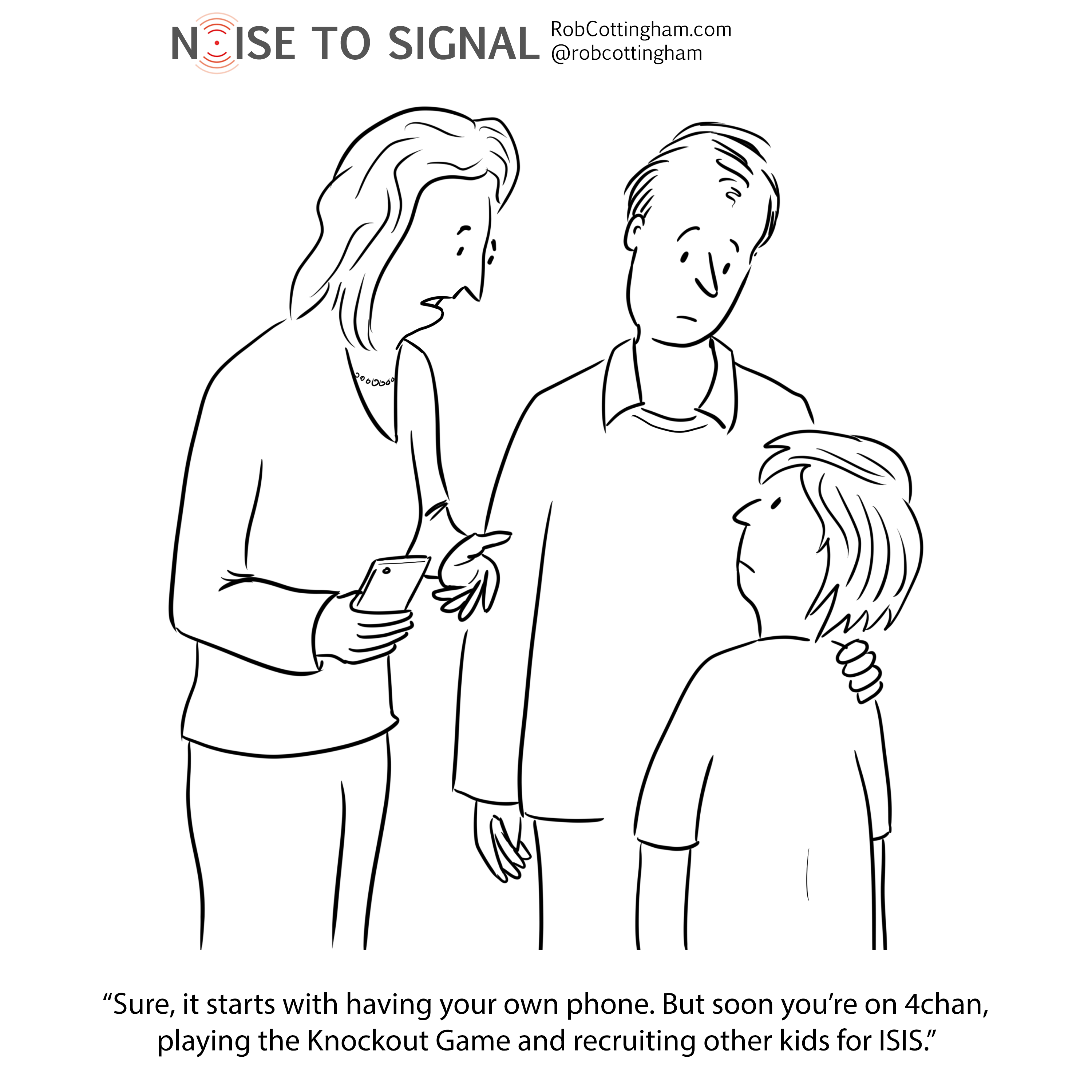 Skim the media headlines, and there seem to be only two possibilities when it comes to parents, kids and technology. Either

(Bonus points if you can find a writer whose byline has appeared under both kinds of headline.) 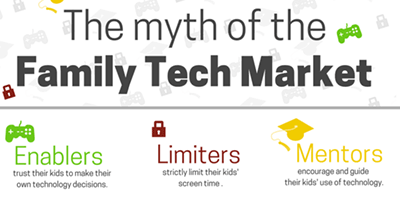 My wife Alexandra Samuel has studied the way parents tackle their kids’ relationship with technology over several years now. Her two-year study of more than 10,000 North American parents has some fascinating findings that she covered at South by Southwest, in a session dubbed The Myth of the Family Tech Market.

Alex has found that parents tend to fall into one of three broad groups: limiters, who try to minimize their kids’ use of technology; enablers, who give their kids more or less free rein when it comes to screens and devices; and mentors, who take an active role in guiding their kids onto the Internet. (Here’s a handy overview.)

I drew seven new cartoons about parenting in the digital age for her presentation. Drawing is easy; digital parenting is hard &emdash we’ve found it tremendously challenging with our own kids. Parents have to sift through mountains of wildly conflicting opinions, suggestions, warnings and prescriptions. And there are plenty of people ready to condemn you loudly and publicly for whatever technology choices you end up making.

So I hope it’s clear these cartoons are meant with a lot of love. Parents are making hard choices every day based on incomplete information, being pulled in eighty different directions by people trying to sell them a product, a service or an ideology… and we’re expected to do it with confidence and certainty.

The truth is, confidence is in scarce supply and certainty is just plain dangerous. We’re all stumbling through this, and a little compassion and mutual respect around conflicting choices will go a long way.