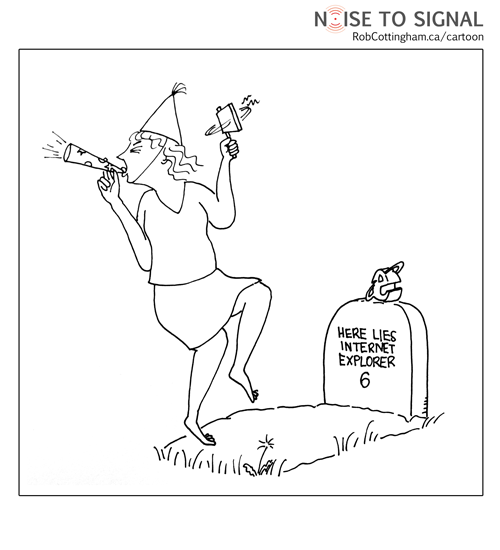 The word that Google has decided to stop supporting Internet Explorer 6 as of March 1 will come as welcome but bittersweet news to designers and developers who have wrestled for years to make perfectly compliant sites work properly in that wretched browser.

Welcome, because this could well be the death knell for IE6. You can make a legitimate case to clients that, hell, if Google isn’t supporting it, why should they?

And bittersweet, because the death of an old foe feels almost like losing a friend. No more nights curled up by the monitor together, trying to remember obscure hacks and puzzling through baffling JavaScript errors. No more repeated “!important” declarations. (sniff) No more (sob) custom script to get “hover” to work… or workarounds for (snuffle) transparent PNGs… sweetie, could you pass me that box of Kleenex?

Consider the number of Web sites that have required major time-wasting workarounds. How many? 200,000? 300,000 at a very conservative estimate?

Now, if corporations can have the same rights as people, then surely abstract life-equivalent calculations can, too. Internet Explorer 6, you’re under citizen’s arrest for murder. That’s right,murder. 25 counts.

Given how arbitrarily and unjustly the death penalty has been applied, I can’t in all good conscience give in to the temptation to sentence IE6 to be taken from this place to a highly magnetic place and to be overwritten with zeroes until it is dead, and may Bill Gates have mercy on its soul.

Instead, install it on a computer that has also committed a heinous crime, seal it in a watertight box with a large solar panel affixed to each side, and set it adrift to live out the rest of its days on the shore of some deserted island. (“Hey, Professor, what’s this?” “Don’t touch it, Gilligan! It’s IE6!!”)

And then pop the cork on a bottle of champagne, and let the bells ring out. Ding dong, the Six is dead.