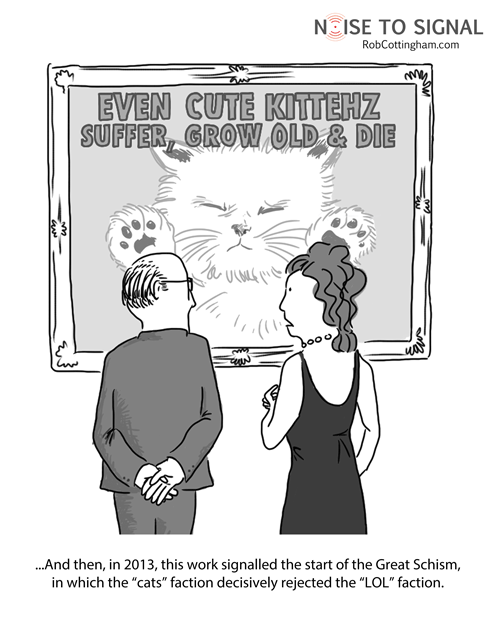 Sometimes I’m halfway through drawing something and it strikes me that I could take it from here in a few different directions. One might be funnier. Another might be more pointed. A third might give Alex a knowing smile. A fourth might crack me up but make absolutely no sense to anyone else (except a few people of extremely discerning taste, and I thank you).

It’s hard not to start weighing that decision strategically. Maybe whoever created the painting in today’s cartoon did just that, reasoning that funny stuff won’t be taken as seriously as bleak, painful, Mayor-of-Casterbridge stuff. (Wow: half a million Google hits on “mayor of casterbridge” and “depressing“.)

For me, the trick is to not overthink it, because that’s a sure route to paralysis. But I still second-guessed myself, and reworked a few things – from the conceptual (my first approach was too close to an earlier cartoon) to execution details (am I getting LOL syntax right?). After the cartoon was finished, I went back and changed “QUTE” to “CUTE” for the sake of clarity.

And that’s not counting the million other questions whirling around in my head, some reasonable, some… less so. “How can I hope to get any SEO leverage in a space as crowded as cat images? Who should be doing the talking: the man or the woman? Should they both be women? But if they are, will people think think it’s a joke about lesbians owning cats? Can I legitimately draw a cartoon about lesbians owning cats, and – wait, do I actually want to? No? How can I change this so Adobe will send me a free copy of Creative Suite 6? Will people see this as a commentary on the Greek debt crisis? All those guys at the next table are drawing with Microns; should I stop working digitally? Oh my god, how did it get to be 11 o’clock?“

I’d be lying if I said I’ve never thought about which approach would help a cartoon reach a wider audience, or make a better coffee mug. (Cough.) But ultimately, the goal is to create the cartoon I want to make, and then reach more of the people who will enjoy that cartoon.

So, LOL plus cat.

(Speaking of a sure route to paralysis: so is trying to find a profound literary metaphor. I was about to launch into a “My Wacom pen must think it queer/to stop without a punchline near” epic poem, ending with “…and miles to go before I [Apple menu > Sleep].” Turns out I was confusing two Robert Frost poems. Also, confusing Robert Frost and Robert W. Service. Also, confusing a quick little writeup to go with the cartoon with a doctoral dissertation.) 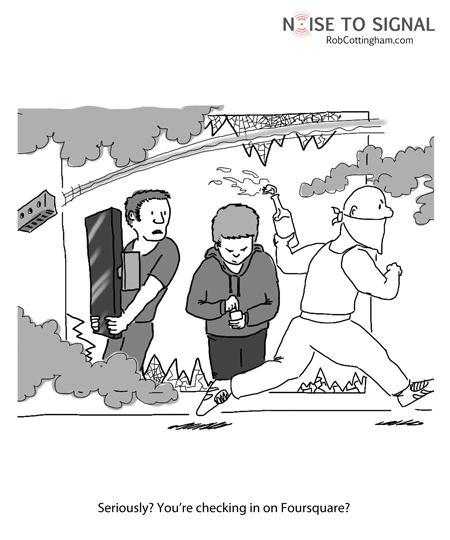 Last week’s post-Stanley-Cup riot in downtown Vancouver was devastating to the city’s spirit, but there’ve been some bright spots – not the least of which was the number of people who came forward the next morning to help with the cleanup.

But there was also some online cheer to be found, some of it from the people closest to me. Here are a few examples:

As someone who tweeted my share of smart-ass comments over the course of the night, I’m acutely aware that some very serious stuff was unfolding. But all of this reminded me of the role that humour can play in keeping emotions from boiling over, and helping us cope with the ugliness the world sometimes throws at us.