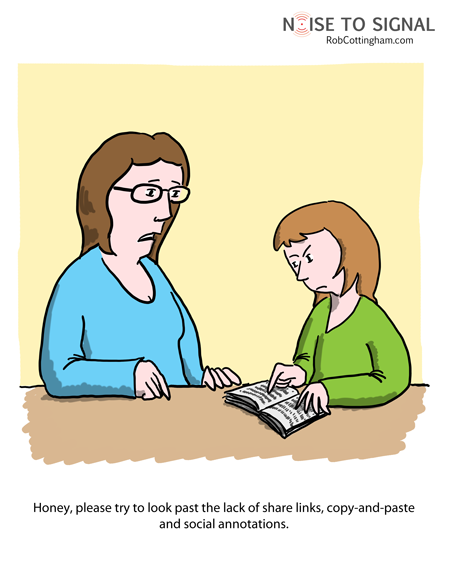 The last few years have seen a pretty serious shakedown in the book world. Bookstores closing their doors, publishers merging or shutting down, and overshadowing it all, Amazon and the Kindle. And now the iPad – with its spectacular adoption rate and the Apple-powered negotiating clout behind the iBook store – promises to turn it all upside down and shake hard.

No wonder, then, that book lovers are wondering if the ink-and-paper era is ending. I haven’t read so many anguished paens to the tactile feel of paper since I stumbled across a alt.sex.fetish.papyrus on Usenet.*

I can relate to that. Thirty-plus years ago, I read Foundation and Empire by flashlight under my comforter cover to cover for what must have been the third time while my parents thought I was asleep. I can remember turning the pages as gingerly as I could, so that the rasp of paper on paper wouldn’t alert my mom and dad to the transgression.

So yeah, tactile experience. Then again, the subtly-rounded back of an iThing filling your palm and the finger-on-glass squeak of a swipe are pretty tactile, too. And I wonder sometimes if books’ days are as numbered as their pages.

But then I see my kids — in a household where Macs, iDevices, gaming platforms and screens outnumber humans by about four to one — putting down the PlayStation controllers and chatting for hours with each other in imaginative play. It takes no effort to get them to abandon the TV in favor of making pancakes together in the kitchen. And with a little prodding, they’ll turn from YouTube to cuddling with one of us as we read them a favorite story… even one they’ve heard dozens of times before.

For them, the war between analog and digital doesn’t really exist. They frankly don’t care about the distinction. What matters to them is the experience, the content, the connection — the story. And sharing it with us and each other.

I honestly don’t know if books as form will survive. But I’m getting more and more hopeful that books as idea will.

And years from now, I’ll still be poking my head into the kids’ room before I go to sleep to watch for the tell-tale glow of a flashlight.

* I completely made that newsgroup up a moment ago. And three of you just tried unsuccessfully to mask your disappointment.